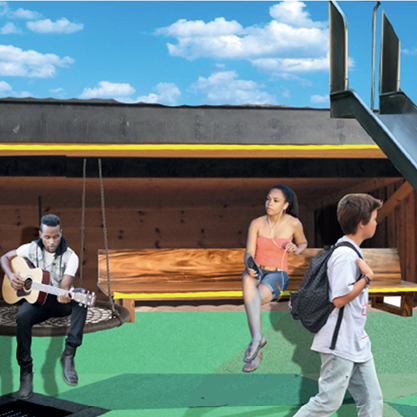 Last week we were lucky to have the bright student Bjørn as our intern, who contacted us, because we did a one-year architecture project at Brønshøj School. Through the week he should work like a real urban planner working on how to design a new space for young people at Hans Tausens Park, which is going to be developed in the nearest future.

We know that young people is a group that the municipality wants to involve a lot more in the planning process, but they have a hard time reaching this group. When Morten Kabell was here for our Park(ing) Day event he stressed that the municipality needs much more knowledge about the needs of the young people. This also has a social profit because it will create more ownership, so the young people will take more care of the city. We learned a lot from having Bjørn in the office and bringing some young energy to the office. Before he left we made a small interview with him to learn more about what he actually gained from this.

Can you maybe start telling a little about your internship?
Yes.! I started with a lot of research on the Internet. Which spaces are there actually for young people? I found images and text written about the subject. The next day I got an introduction to different interview techniques, and Gehl analysis principles. Then I went out in different urban spaces to make interview with young people, and to observe different urban spaces. It all ended up in a small report with collages of a new suggestion for an urban space at Hans Tausens Park.

What did you learn from this week?
It has been nice to analyze urban space, and made me think in another way. In the future I will be better at not only looking at my own needs, but looking at an urban space for different groups. The project I did is nice because it has to do with urban space for people on my own age, and to work with a space that actually needs to be changed. Now when I see an urban space I think more about the challenges and potentials, and it is like a have a new way to look at the city. I also learned a lot about how to use the adobe programs and to work creatively.

Did something surprise you in your investigation?
Yes. I have learned that not all young people wants to be active, and many also just want places to hang out and relax. Also I learned about how to integrate different function in one space. It gave me a new insight to make the Gehl inspired observation on different urban spaces. I found out that Charlotte Amundens plads is a lot cooler than I expected. It is creative and you can skate in different ways. It is actually quite nice that it isn’t so big, and that it is hidden away from the traffic noise. All the good things surprised me a lot, because I did not see them before. I also looked at Israel plads, which is a place that I really like and where I hang out a lot with my friends. But when you look at it with different eyes of an urban planner you realize that it is actually too big, and a bit doll. It is hard to fill the space up with people and create livefullness, which is one of the things that make a good space.

How was it to be a part of the arki_lab office?
It was super cool, and also that I had my own project. Arki_lab is a funny place to work at, and also very nice that you have to speak English. I really liked that it is a small working space, because you get a better understanding of the company and to know all the colleagues. I also learned that the lunch always ended up in political discussion…

If you should describe arki_lab with 3 words what would it be?
Creative, social and intimate.

We would like to thank Bjørn for his contribution and engagement. We always gain a lot from getting new people in our little laboratory to do experiments with us. It has been very interesting to work so closely with the eyes of the youth. We hope that Bjørn will be more aware of how he actually has the possibility to change the surroundings to the better. If you are interested in seeing the work he has done, then stay tuned we will post it in the nearest future!