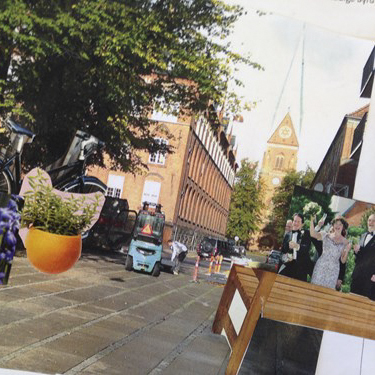 Last week we continued our work with the students at Blågård skole. The module is called “The Local Square” and aims to have students in 7th and 8th grade work creatively with analysis and suggestions for improvement of 4 smaller spaces in their local area. On Wednesday we met up with 7.B at the square between Griffenfeldsgade/Korsgade/Stengade and thursday with 7.A by Blågården just across Korsgadehallen.
All the students brought a chair to the site so we could arrange an outdoor-classroom. After a short introduction on how architects work when creating urban space the students were asked to do a range of tasks found in a printed guide. Students were asked to take a look at the users of the site and answer the following questions:
• Who uses the space?
• Does the place feel private or public?
• What do you imagine the architects had in mind when they designed the place?
• Do you think the space is being used in the way they intended it to?

The next step was analyzing the area in itself: What do you think of the place? As the square looks now, what is negative and what is positive about it? As an extension of their answers they had to take a photo of either a good or bad thing about the space and upload it to Instagram with #localsquare14 and #good or #bad. Learning from their last time experience during the Urban Run, we gave students the option to send it directly to Arki_lab’s Instagram account.
The students also had to explore the place through a sensory exercise. Moving around in pairs with one student blindfolded and the other one guiding, they were to experience how to heighten their senses in order to perceive the place differently. We also had them block the sound to make them aware on how much sound is affecting our perception of a room.
We had great success with this exercise and the students found it interesting how they suddenly became aware of details of the area that they haven’t noticed before, how the sun/shadow has a huge impact on where we want to dwell and how much sound there actually is around us all the time.

Lastly, we had them look at the urban furniture and answer the following:
• Is it possible to take a rest at the square?
• What is missing to make this an option?
In relation to this, they had to move around their chairs to create new possible seating areas around the various sites. The students placed themselves all over the squares and had very different arguments defending their choices. Some sat along the walls surrounding the square with the argument that they felt more secure. Some students placed their chairs in a circle around a tree because of the shelter the tree provided and other students sat in the middle of the square where they explained it would not disturbing the cyclists passing by and the neighbors living around.

Back at school, the students had time to reflect on their analyzes in order to create small collages of their ideas for the site. We found that even the more academically weak students and those who normally are running around in classes were sitting and very concentrated on their task which even the teacher noticed this!
Afterwards the students had to make a model of their vision. The outcome was fantastic and once again we experienced the weaker students to be the most engaged!
At last we did a common presentation of the projects, and we experienced that many of the students articulated security as an issue when walking around the city. They stated that factors such as lighting and to have other people around you as being essential for them to feel safe.
Furthermore, they were very focused on the fact that there must be room for everyone and not just one group of people in our urban spaces. We are really excited that these young people are so eager for the city they live in to be safe and for all!