We transformed an empty property into a co-creative City Lab, where the local community was involved in designing the city of Asnæs – with a special focus on designing with the youth. The City Lab was activated through educational workshops, exhibitions, events and city tours etc., during which we collected local knowledge and ideas from the inhabitants on how to develop and improve the public spaces around their city. The gathered ideas, dreams and wishes were then translated into permanent designs around Asnæs. The project was conducted in close collaboration with Odsherred Municipality and was funded by the Danish Ministry of Transport, Building and Housing.

Click on the links below to learn more about specific phases:

THE GLOBAL GOALS
We strive to use the Global Goals as a structuring framework for our projects. Here we show how this project contributes to a sustainable future.

3 GOOD HEALTH & WELL-BEING
In Asnæs we support a healthy and active community by adding new functions and activities to existing public spaces.

4 QUALITY EDUCATION
The local educational institutions were integrated and students from both primary and high school learned to apply architectural tools.

8 DECENT WORK & ECONOMIC GROWTH
The project focus on improving Asnæs' image as an attractive and lively commercial junction for both tourists and the catchment areas.

17 PARTNERSHIPS FOR THE GOALS
The project has brought local initiators and decisionmakers cloaser together which in the future can ease the path for new sustainable projects.

In the first phase we conducted different community and stakeholder engagement workshops and events to activate the end-users and collect local knowledge and ideas. The CityLab served as the engagement hub, where citizens could participate in the development and also get information on the status of the project.

The engagement process was divided into 3 phases: 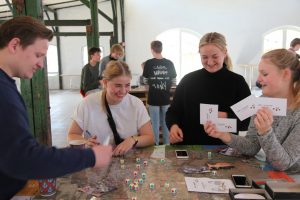 Youth as catalyst for change

The educational institutions played a crucial role in the project – especially at the beginning of the process. We collaborated with the local high school and middle school students, who took on the role of planners and studied the needs and potentials of their city, coming up with new design solutions. Using our collaborative engagement tools, the students developed their surroundings through brainstorming design ideas. By involving the youth, one of the main user-groups, the project aims to create a sense of ownership around the city and its development. This initiative also responds to the city center development plans that aim to strengthen Asnæs’ position as a youth-driven and education-oriented city. 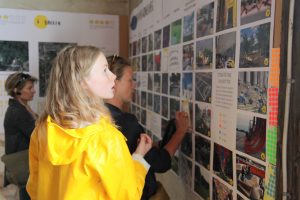 Open lab, events and exhibitions at the CityLab

Throughout the entire process we established connections with local citizens, local industry, volunteer groups, community organizations and more. Supporting and strengthening the local community was essential to the project, fostering a strong sense of community. The CityLab was a physical platform that built a bridge between the development project and the end-users. It served as a space for continuous feedback loop, both collecting citizens ideas and also demonstrating them to anyone interested. Citizens were invited to exhibitions and events in the CityLab, where they had the opportunity to see each others' visions and discuss their ideas with other community members. The open labs encouraged people of all ages, gender etc. to actively participate in shaping their city.

Following the engagement phase, we analyzed all the collected data and knowledge to develop strategies on making Asnæs a more liveable and user-centered city. The numerous engagement initiatives helped us identify 9 key sites around the city. Through analyzing the inputs from citizens and stakeholders, we further pinpointed 4 sites of interest. We also combined our methodology and data treatment process in a comprehensive report for the municipality, in which the qualitative and quantitative data is clearly demonstrated. The report also serves as a starting point for other individuals and organizations, who would like to further develop Asnæs in the future.

Throughout the process we have:

The concept designs were developed based on the collected knowledge and input to inform the next phase of the process, where we tested different spatial concepts through temporary installations.The overall strategy was to create a connection throughout the city, from arrival to destination, that would cater to different user-groups through different functions. 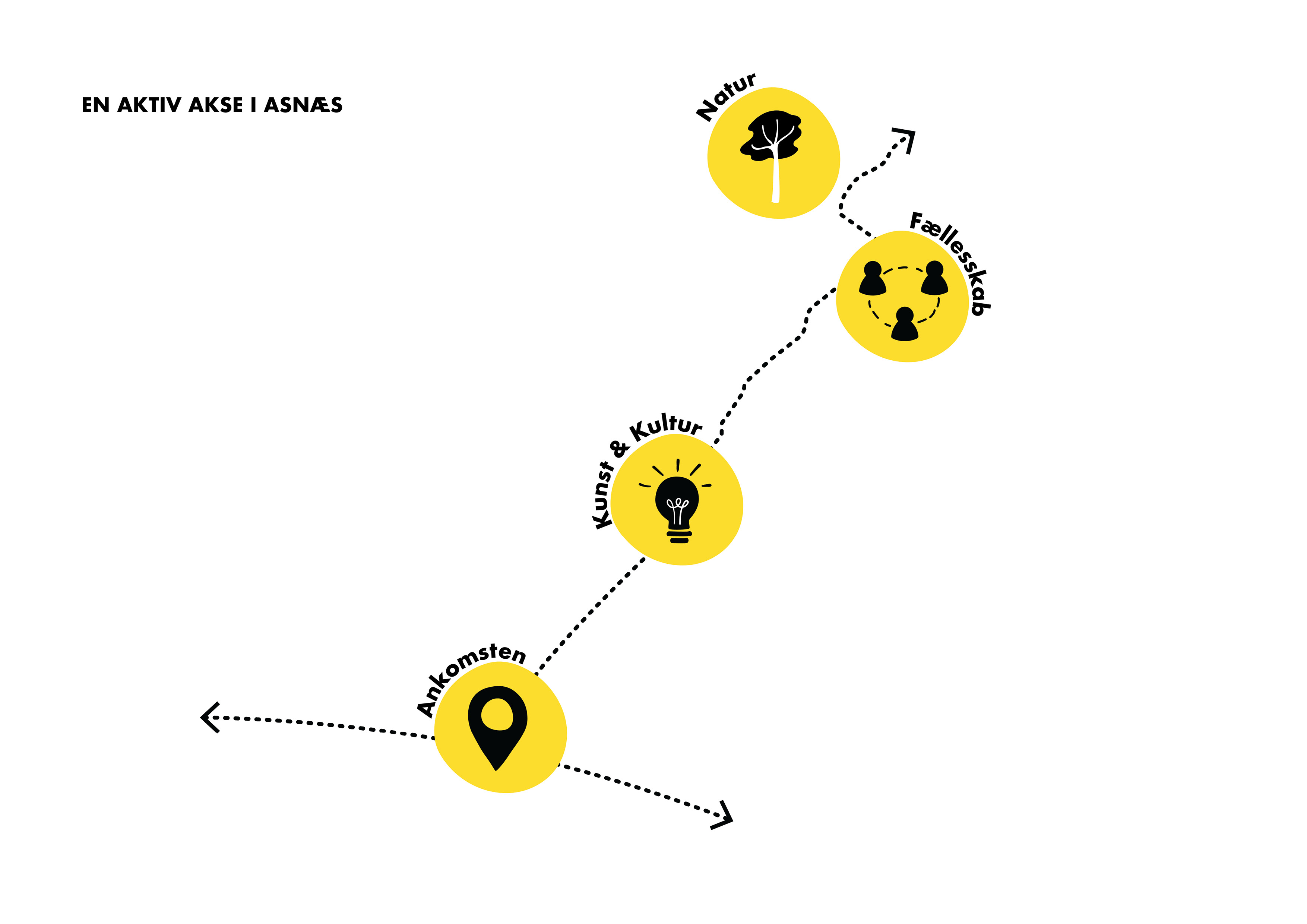 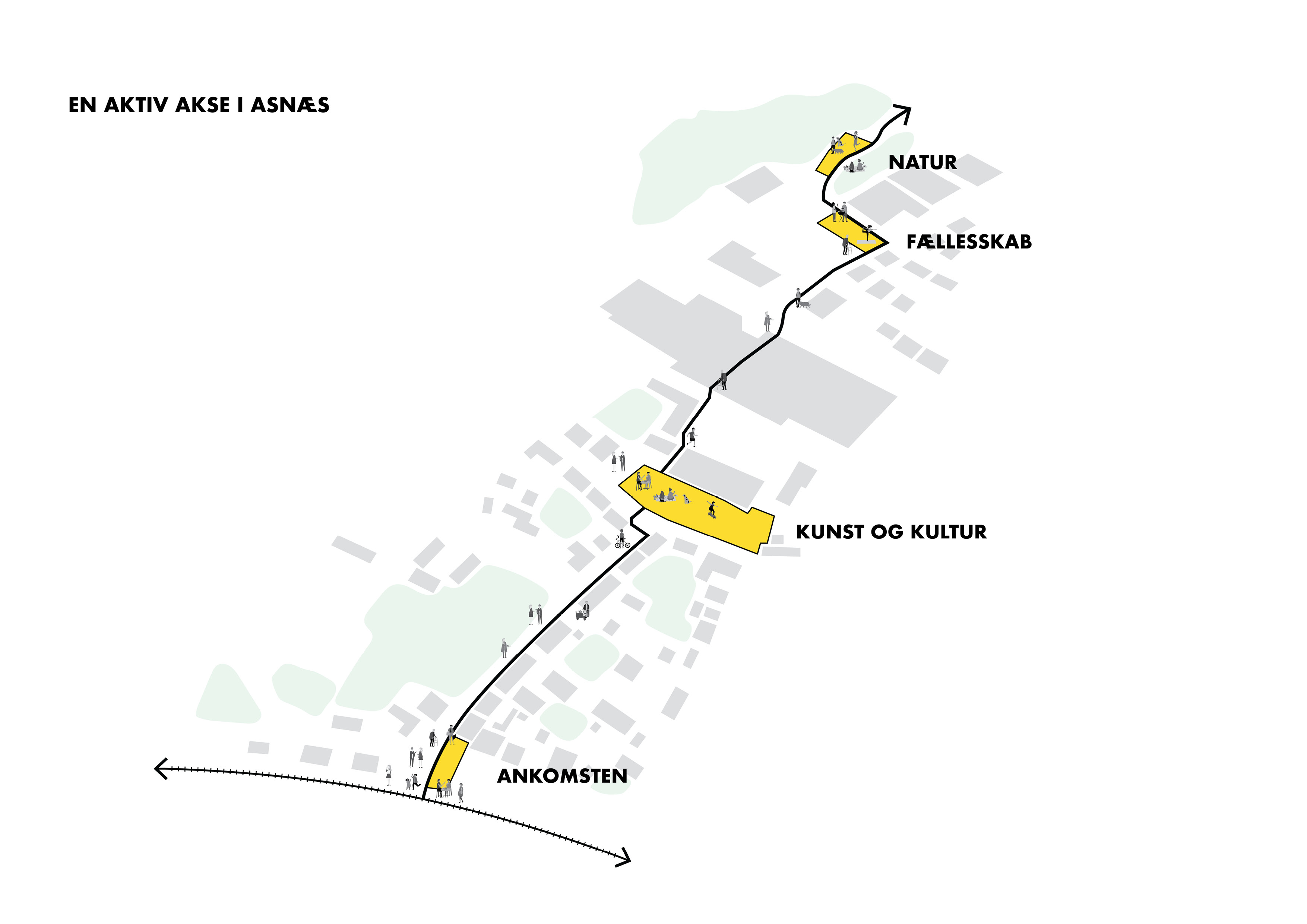 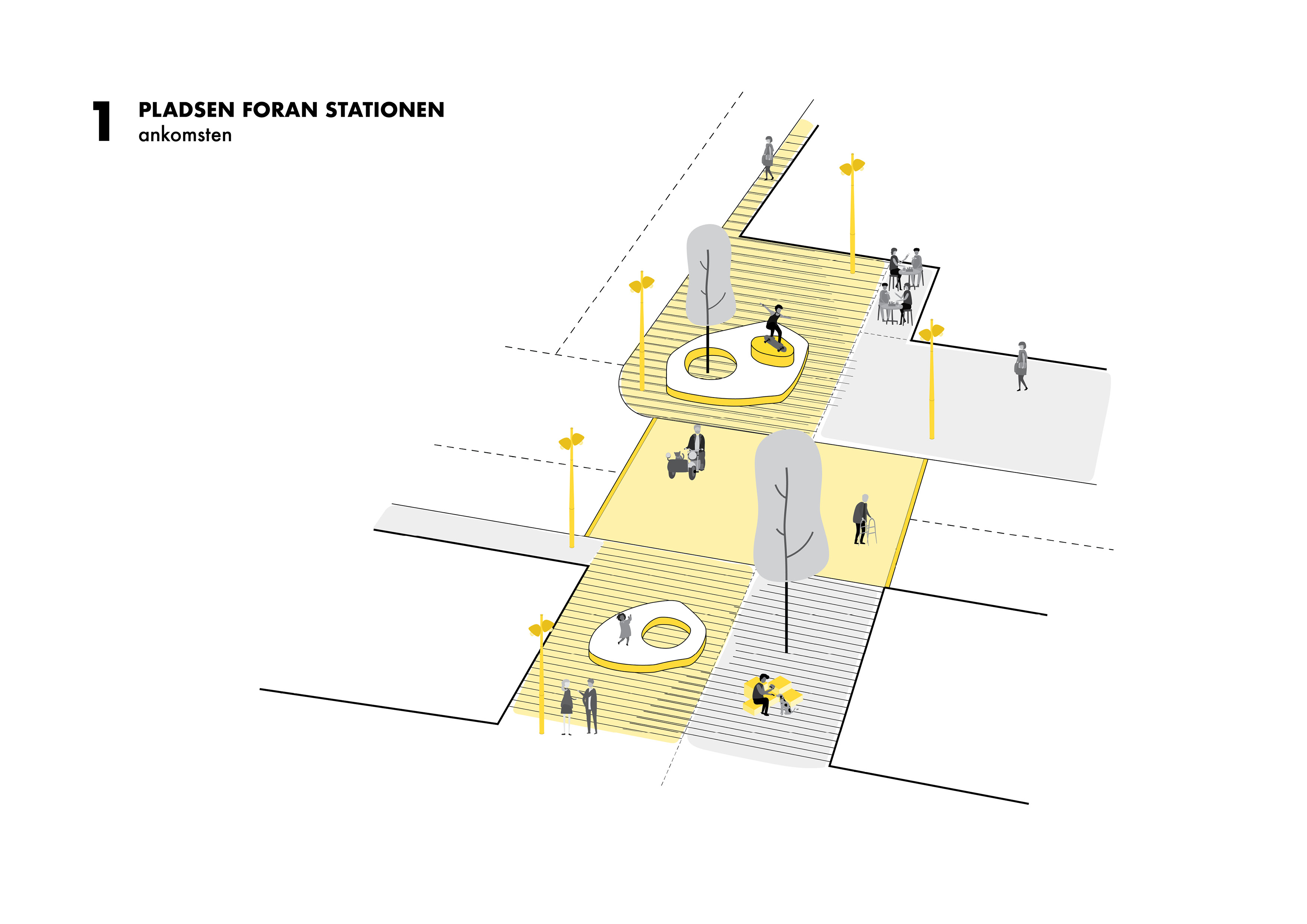 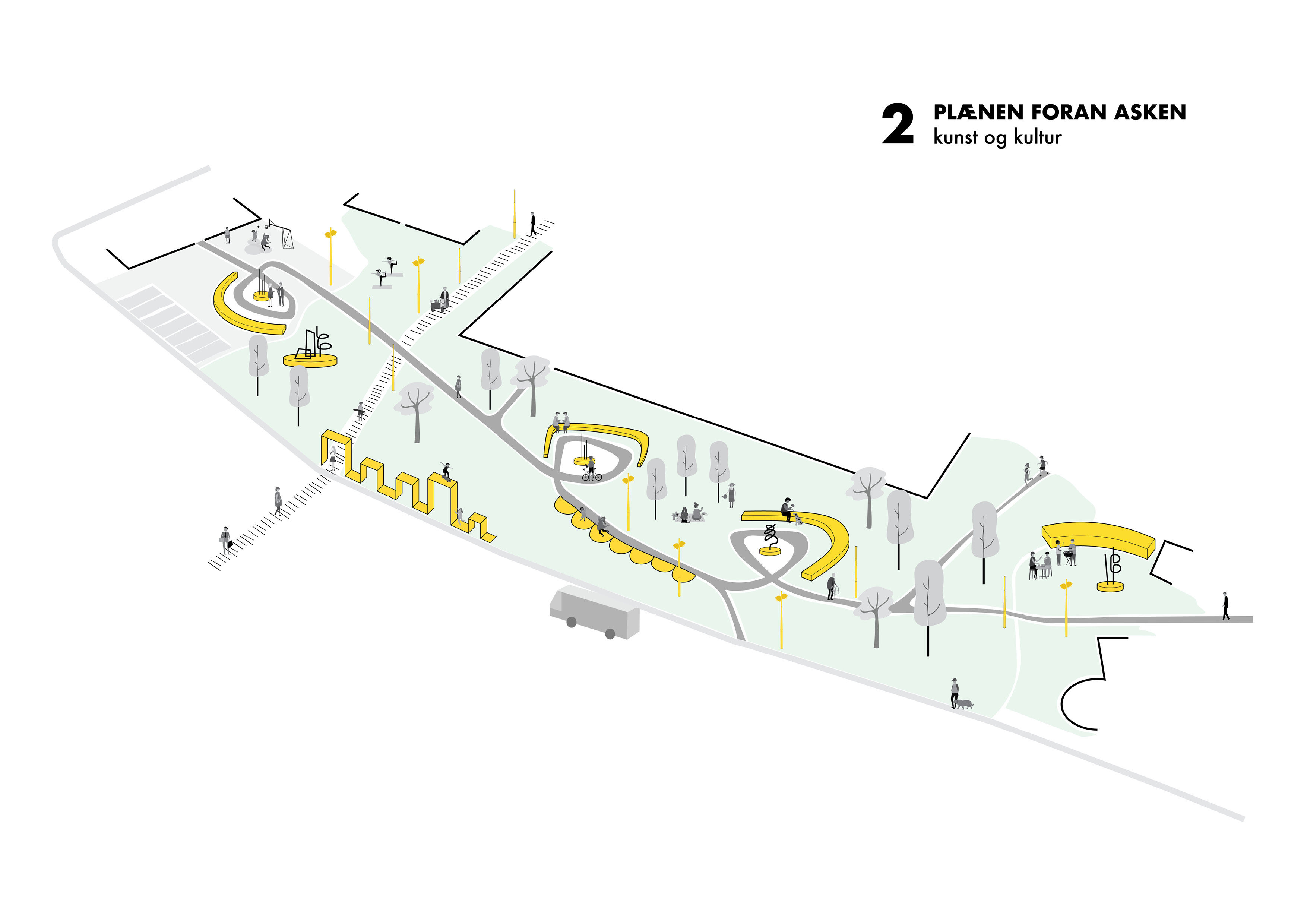 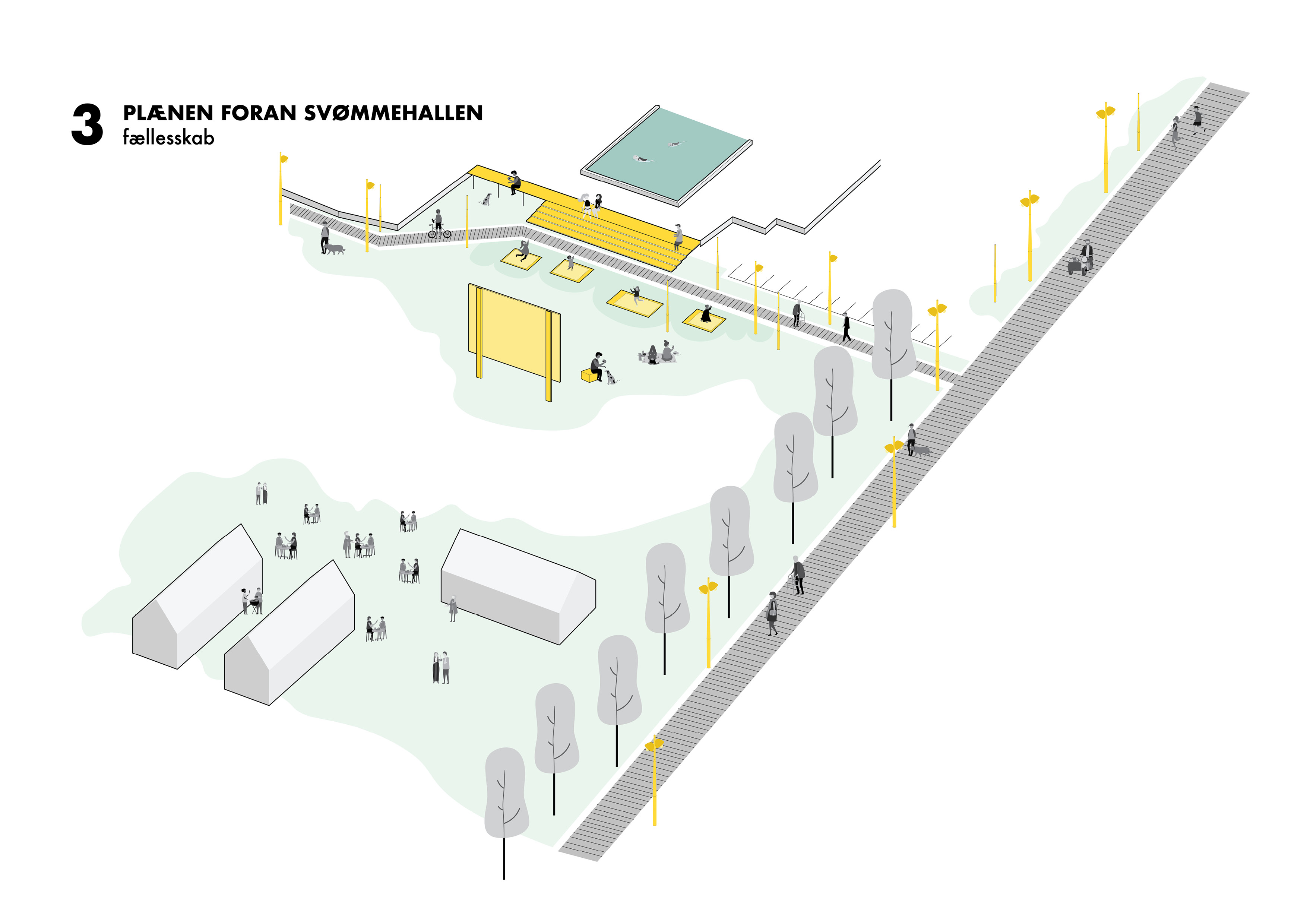 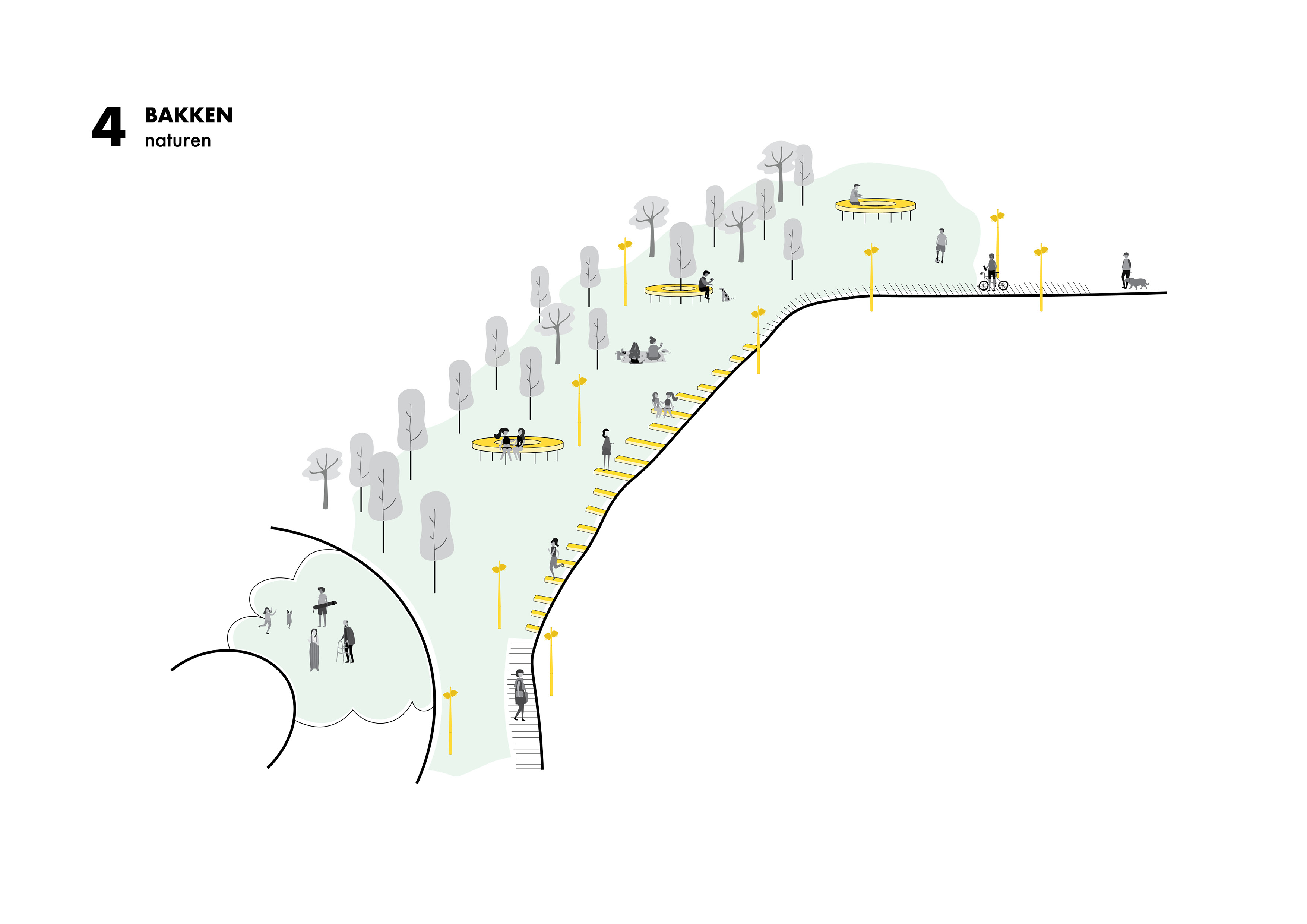 The report contains all the raw and analyzed data and knowledge collected throughout the engagement phase. It serves as the underlying argument for selecting the 2 sites out of the initial 9 around the city. 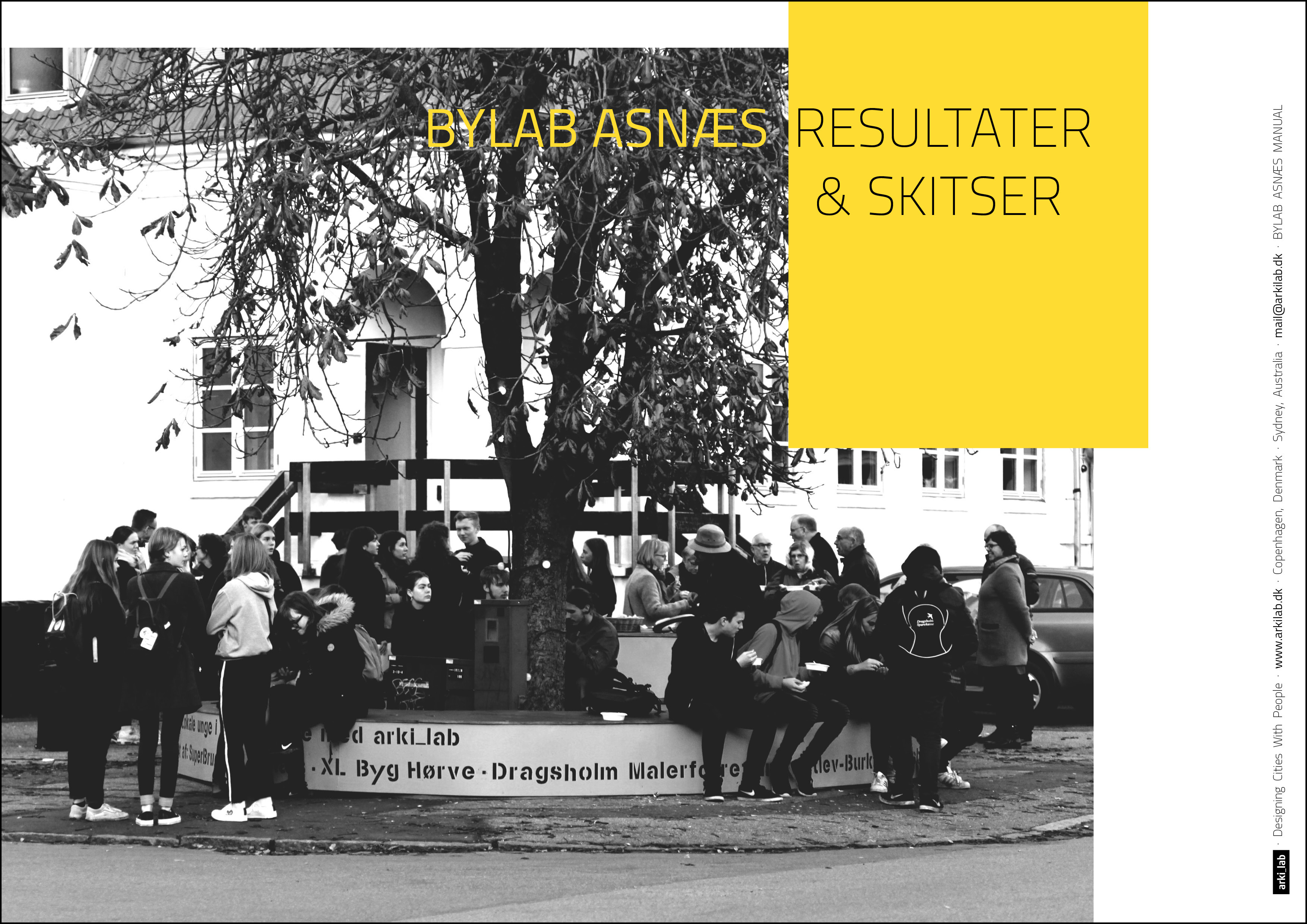 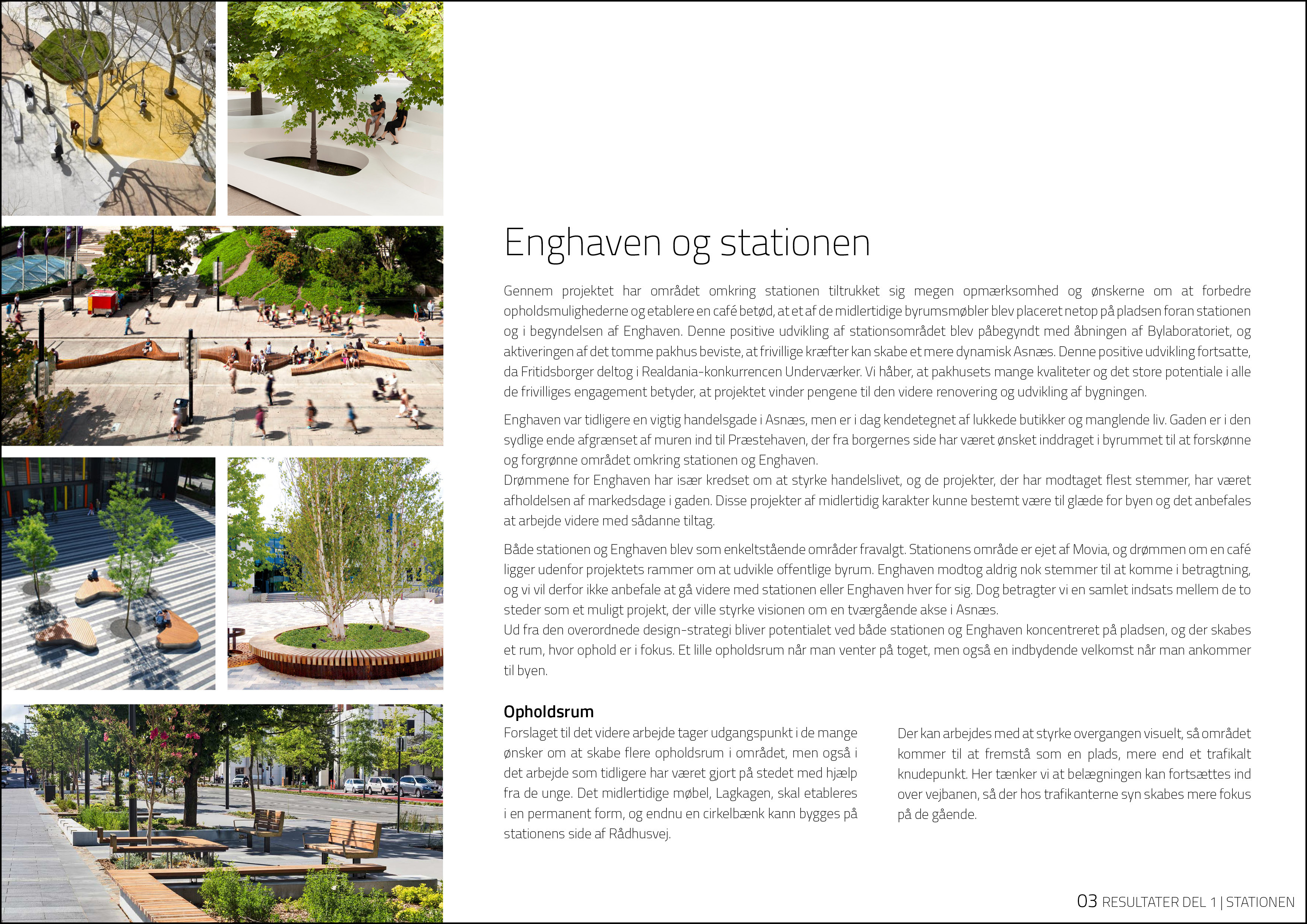 Building on the concept design and strategies from the previous phase, we translated the knowledge into design projects, which aim to strengthen the local identity and sense of ownership. As the first step of the design phase we constructed temporary installations of the proposed ideas around the city. This enabled us to have another round of feedback loops, further revising and iterating the final design according to new inputs from the community.

These ideas and comments were integrated into the final design, which were constructed in the second step. The final 2 sites were fundamentally decided by the community's wishes and ideas. Both sites catered to multiple different user-groups, which meant a number of different functions incorporated into the design. The final designs serve as great examples for the importance of user-centered development by involving the citizens throughout the process - from concept to final design. The evaluation conducted in the following phase also attests to the value and success of designing with end-users.

Temporary design as a strategic tool

Throughout the process the young people were responsible of developing, designing, and, to some extent, building and setting up the temporary installations around Asnæs city center. The temporary designs served as tools to test different solutions and develop permanent solutions with strong local support. The installations ensured that the permanent designs align with the community's expectations and needs. Our role again was to translate the citizens' shared concerns into architectural design solutions. These continuous feedback loops ensured a sense of ownership of the permanent development. 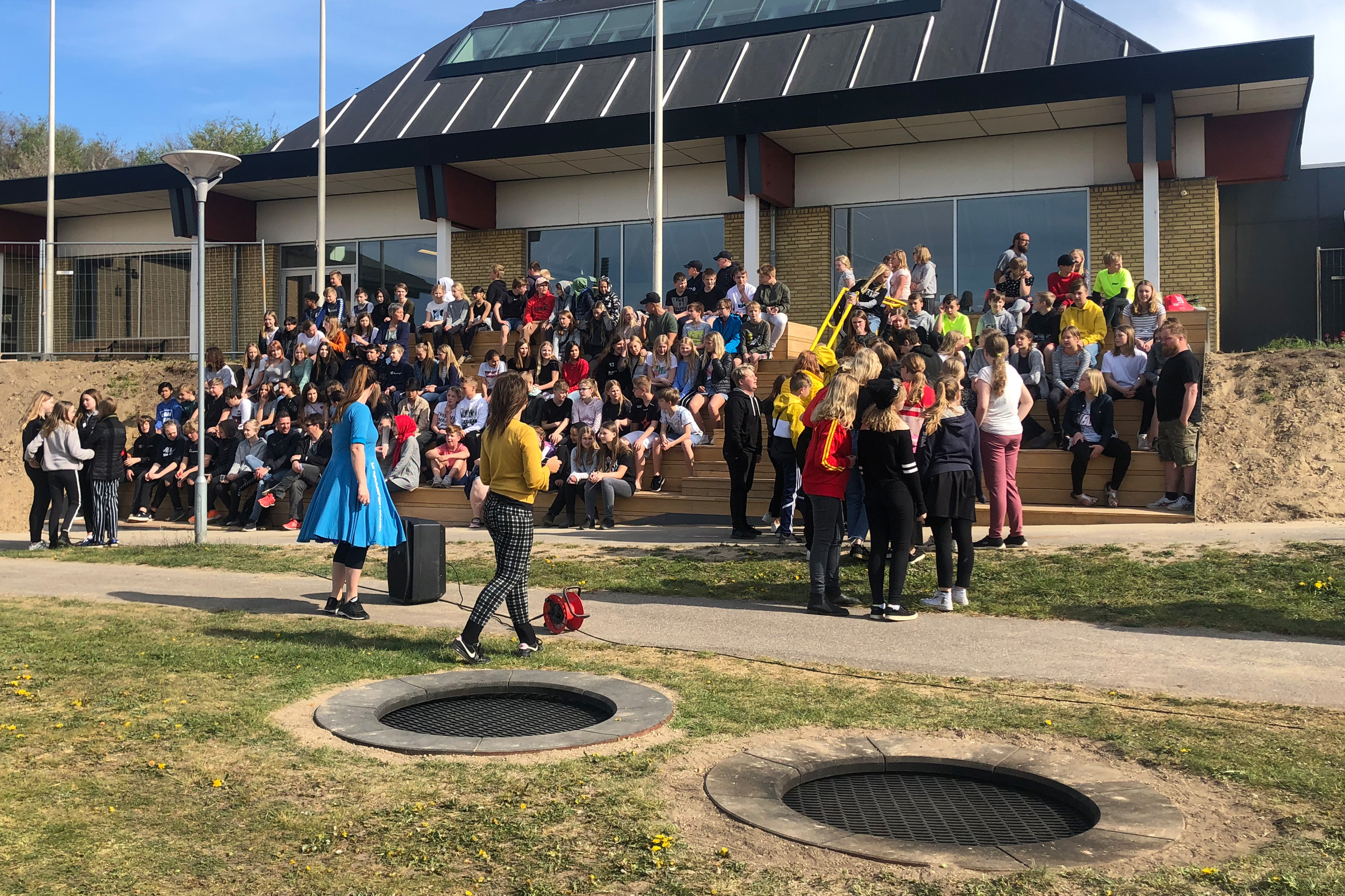 We extended the community involvement into the construction phase by collaborating with local carpenters and builders for the temporary and permanent installations. A main goal from the beginning was to strengthen the existing local assets and resources through including them in the project. We collaborated with a local branch of NVPro (Construction School) to build the temporary installations around the city. The students (aged 15-25) built 1:1 scale installations of what was to come later, we strengthened the sense of ownership of the final products.

The final evaluation was conducted with the key stakeholders and the client to summarize the 2 year long process and end-results, both quantitatively and qualitatively. The project resulted in two documents: a manual and a final report. The manual documents the methodology, data treatment, stakeholder mapping etc. whereas the final report captures the overall experience and milestones of the project.

The goal of the manual is to communicate the value in co-creation and engagement processes, which is typically difficult to measure and qualify. The evaluation derives from the following engagements: 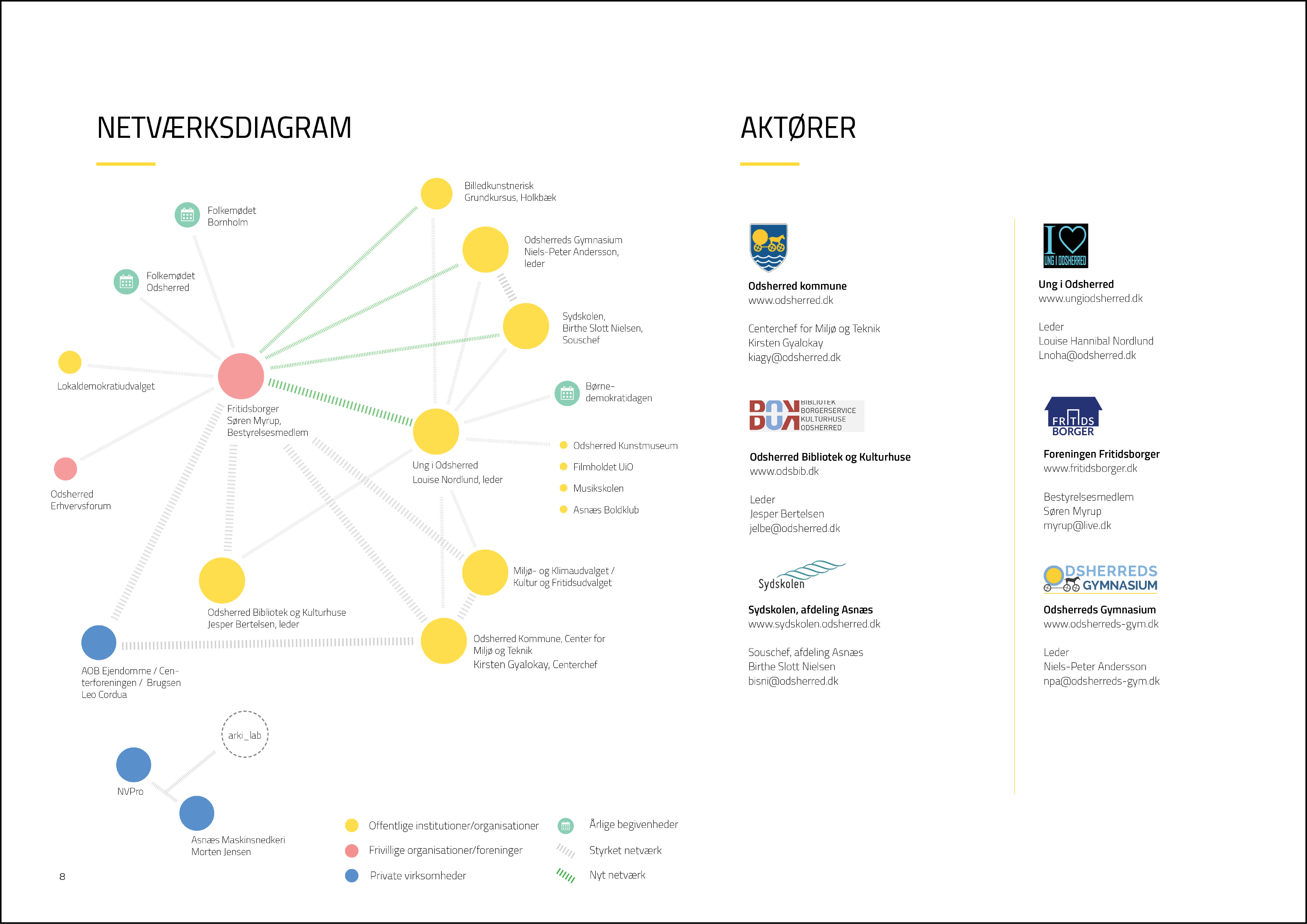 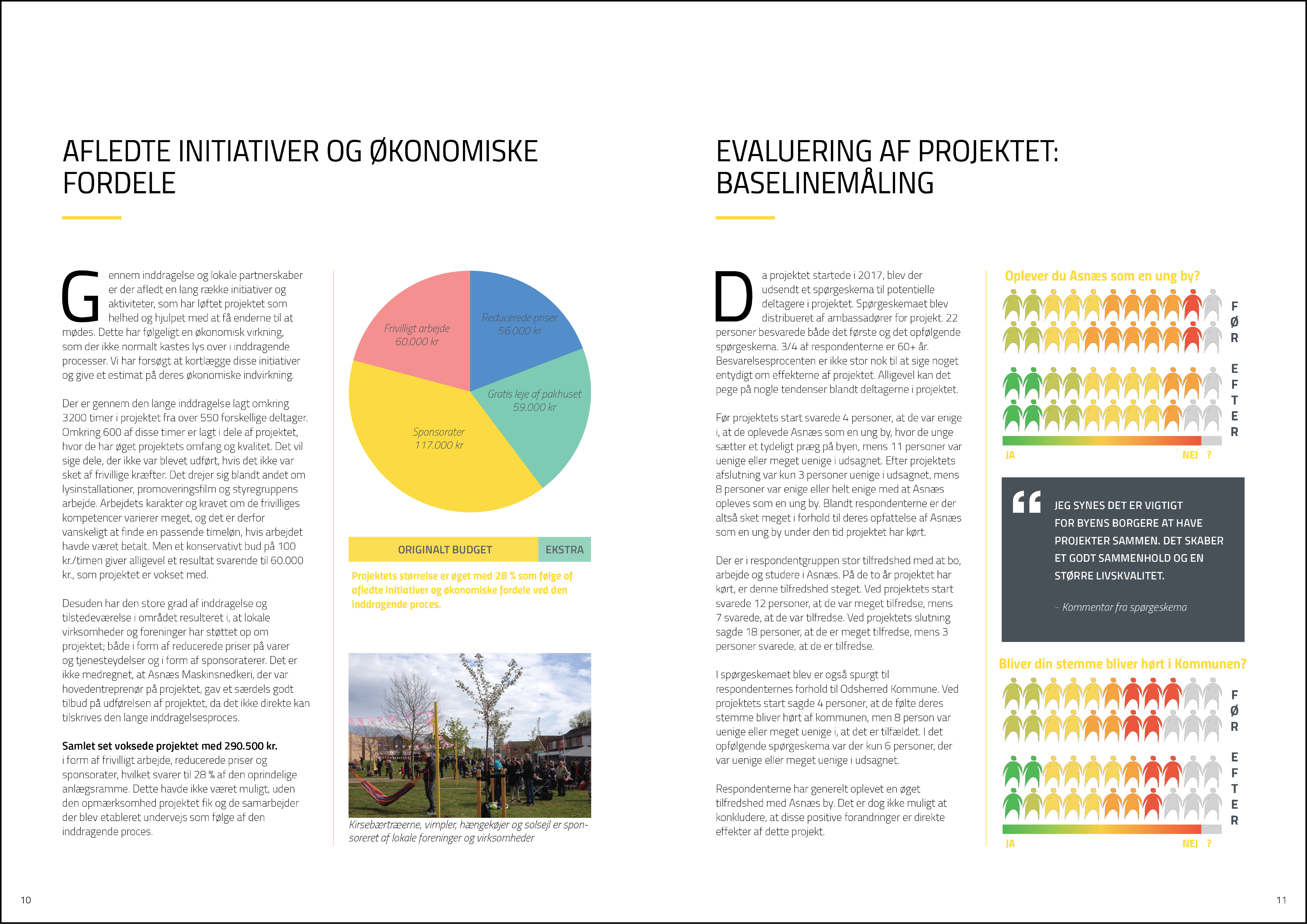 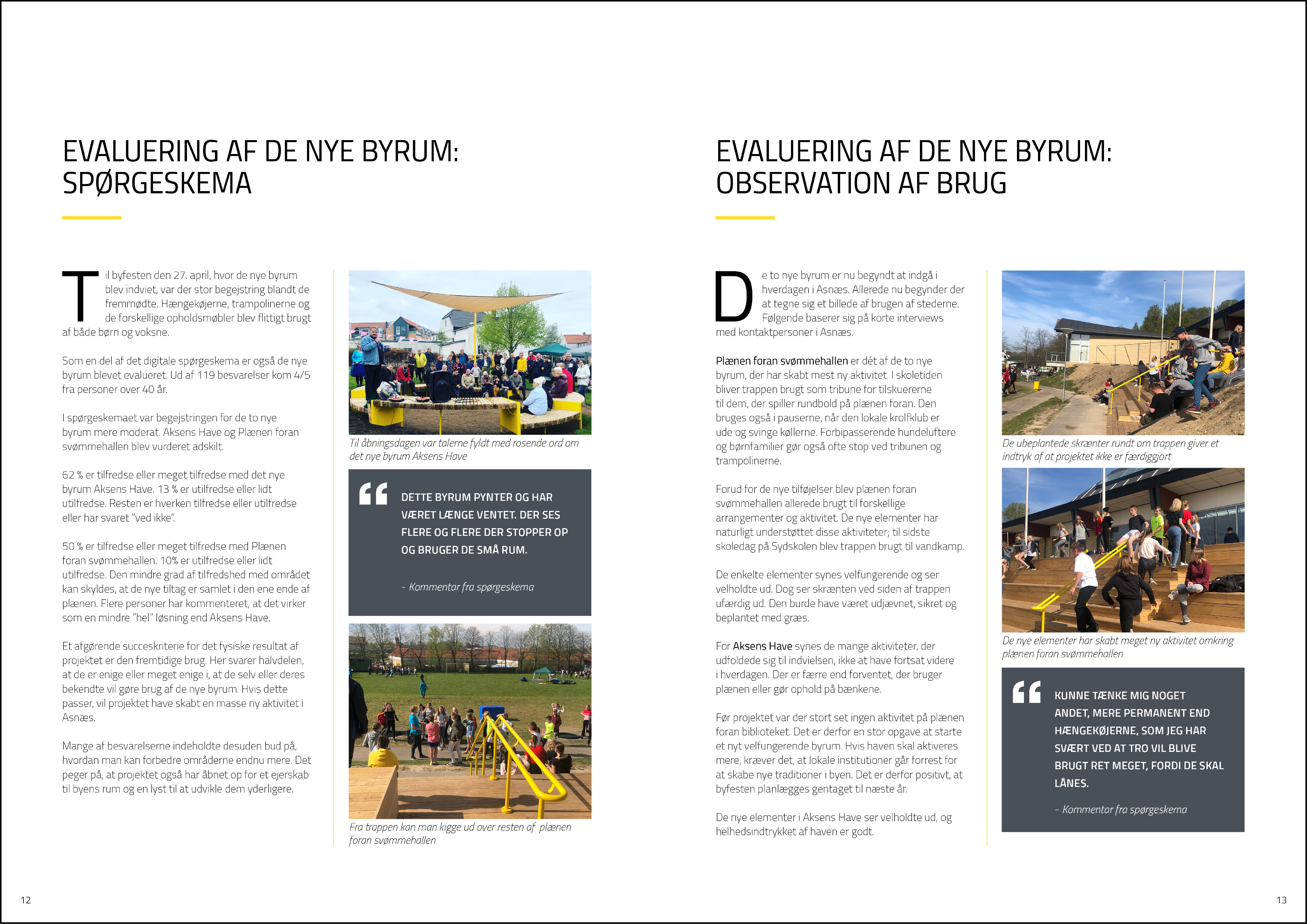 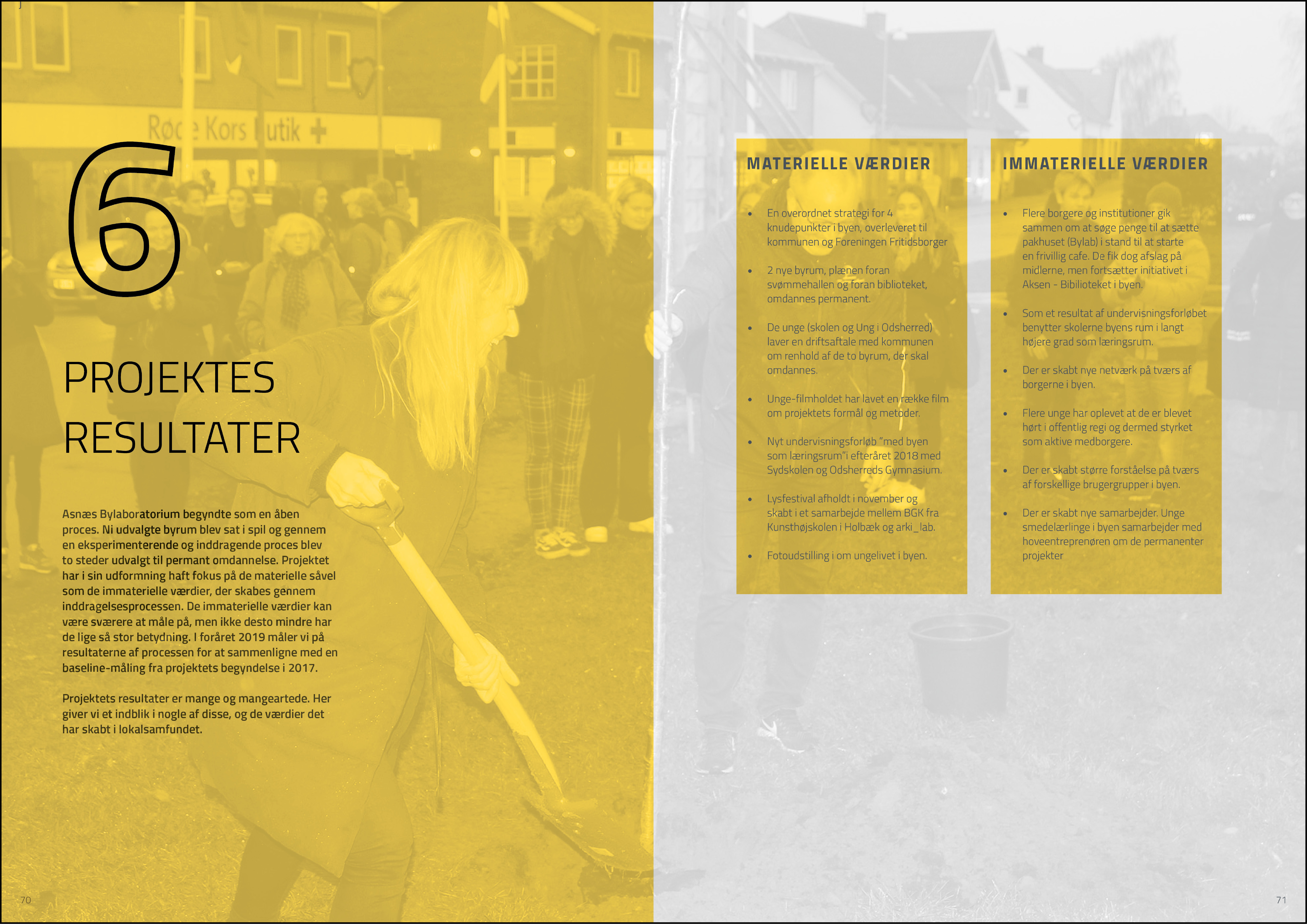 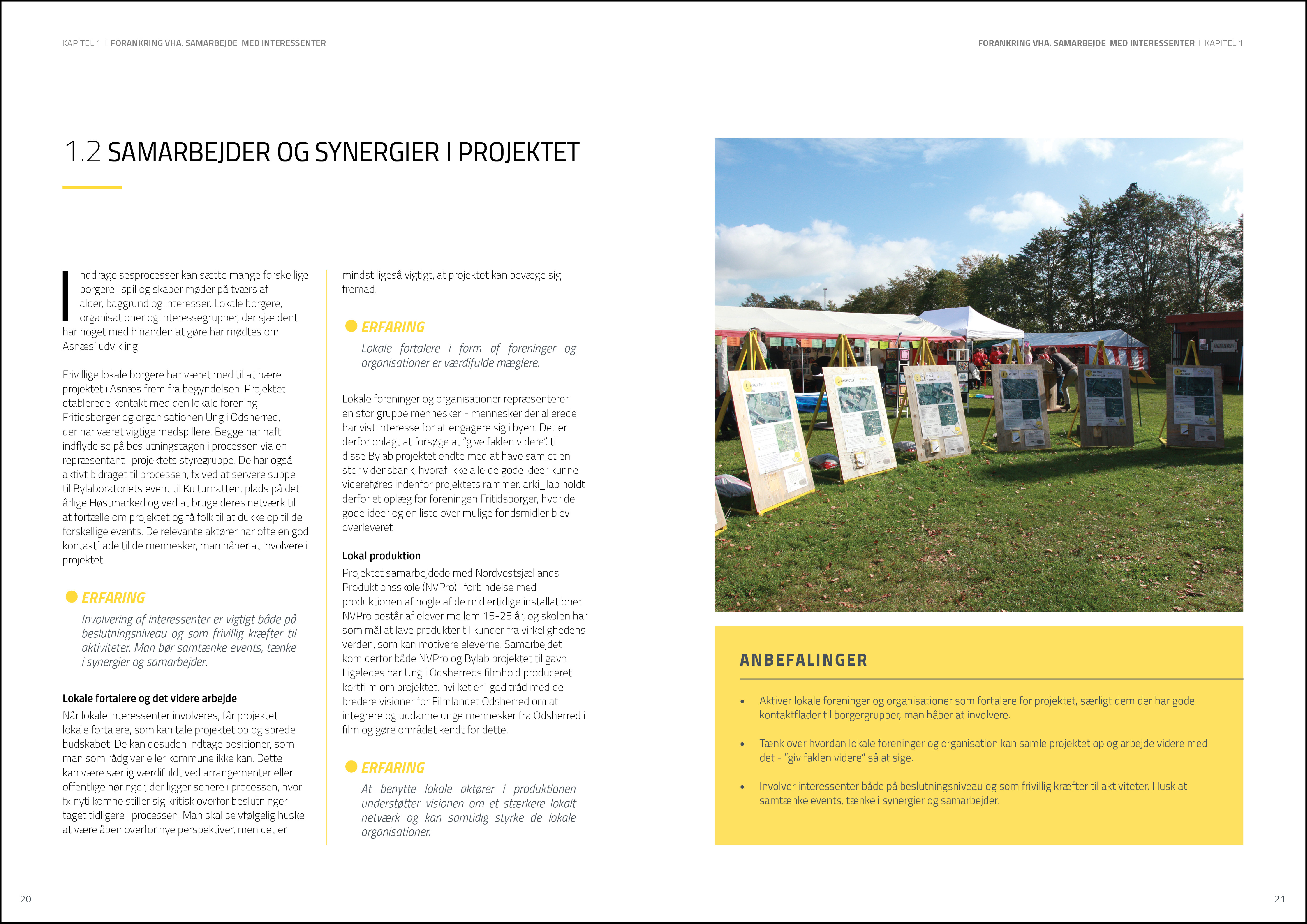 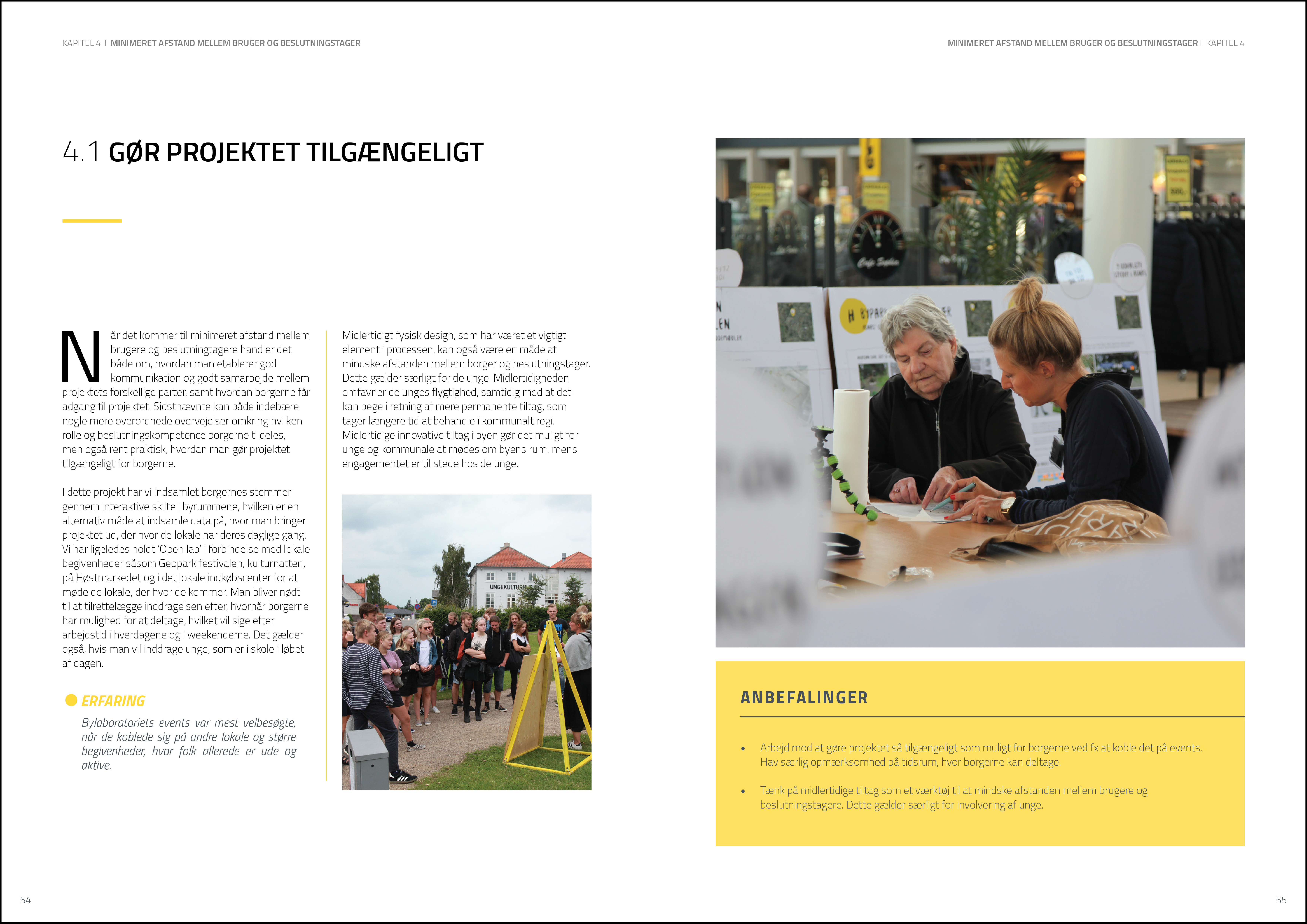